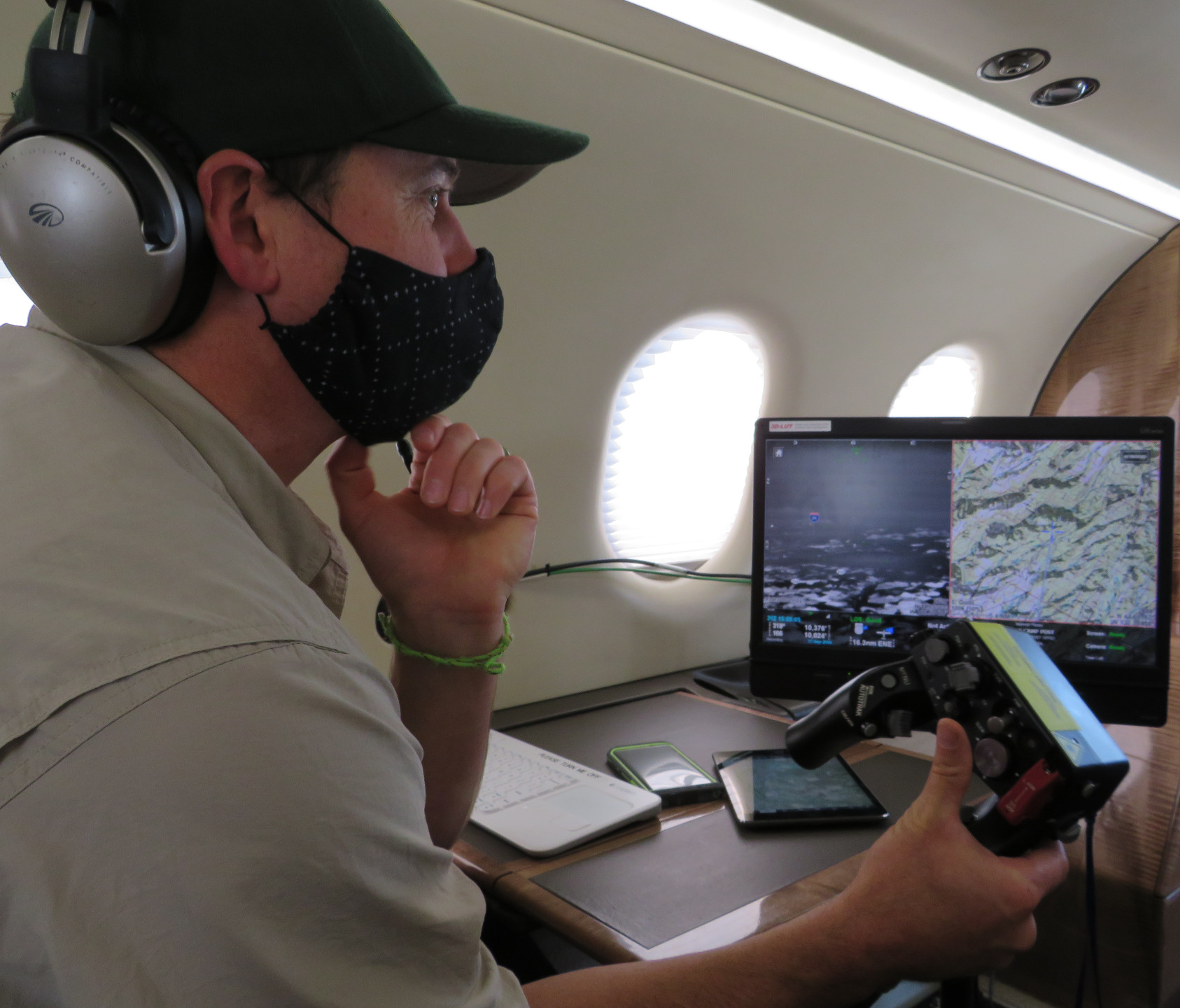 Cole Lindsay was nearly 20 nautical miles in the air Thursday morning above Oregon’s Silver Falls National Park as the massive Beachie Creek Fire burned. Maneuvering a contraption that looked like a tricked-out Microsoft Xbox controller, Lindsay zoomed a camera in on spots along the west edge of the fire ledge. The fire had shape-shifted and smoldered since Wednesday, burning less intensely in some areas.

“You can see those little spots poke out and catch your eye,” said Lindsay, a multi-mission aircraft operator with the Oregon Department of Forestry. “I can zoom right in on it, get coordinates and a map of where it’s at.”

But looking out the window of the small aircraft, dense smoke hovering from the fires burning more than 900,000 acres of land below obscured everything in sight. The only way Lindsay could see through the creamy soot was with the assistance of a thermal image surveillance camera hanging from the plane’s underbelly.

In essence, the camera built by Portland, Ore.-area company FLIR Systems can see through the smoke. It does this by detecting heat using short wave infrared or SWIR thermal imaging, then visualizing the information.

Inside the plane, Lindsay viewed a monitor displaying renderings of heated areas in white on a grey background. His heavy-duty two-handed controller swiveled the camera under the plane, moving it 360 degrees so its sensors could detect heat from any angle miles away anywhere on the ground.

The forestry department is using this technology for the first time. It began running flights to detect fires in July in its plane equipped with FLIR’s thermal imaging and night vision cameras. Now, the department’s sprawling firefighting force is in full fire support mode.

“Before this technology, it was just using visual line-of-sight and putting aircraft up and looking for fires during the daytime,” said Neal Laugle, ODF’s state aviation manager.

The whole goal of this system is to be able to catch those fires at the smallest size possible.

The thermal imaging technology detects heat even if it has yet to produce a flame, Laugle said while working at ODF’s makeshift command center inside the agency’s Salem airport hangar. That would come in handy later Thursday night when thunderstorms and lightning strikes arrived, bringing both needed rain and risk of new fires.

“When lightning is putting hundreds of strikes down and we’re having fires pop up, all this tech helps [firefighters] prioritize resources to go after those fires that pose the greatest threat,” said Laugle. “The whole goal of this system is to be able to catch those fires at the smallest size possible.”

The 2020 wildfire season has brought damage of historic proportions to Oregon, destroying small towns and killing at least eight people in the state. When Lindsay surveyed an area near Salem yesterday from above, 10 large fires across the state burned below.

The FLIR system has daylight and low-light cameras that don’t work so well to see through the several hundred feet of smoke rising above the wildfires. But that’s where the shortwave infrared thermal imaging camera comes in handy.

“It is much more adept to penetrating smoke and water particles in the air,” said Marshall Grose, manager of FLIR’s applications engineering group. “One of the things we have found with this particular fire incident is the smoke layer is so thick and heavy … this has been extremely difficult to penetrate through that huge smoke layer that we’ve had over the valley here.”

The software allows users to choose among several different settings. One enables an algorithmic local area processor to kick in that helps bring out more detail by visualizing variations in temperature. A standard image would only visualize a large heated fire glow without highlighting definition between the more direct heat of the fire and its radiant heat.

“When you use this local area processor, it will actually identify within that glow the hottest point, so they can see how much of the actual fire is burning, and the rest of that’s radiated heat from the fire,” said Grose.

The thermal imaging data showing where Oregon’s wildfires are burning, their hillside locations, fire behavior, and more is disseminated in photo and video form in real-time throughout the state’s dispatch centers. It can be stored and uploaded into compatible software that layers in topographical maps.

“We’ll be able to show those snippets and videos to our district personnel in real-time so as soon as we’re detecting a fire, our district fire managers will be able to see it,” said Sarah Lathrop, an ODF state aviation coordinator who helps manage firefighting aircraft operating across the state.

The ODF has also started to integrate its fire data into a more comprehensive system that allows state and federal agencies including the U.S. Forest Service, Bureau of Land Management and Bureau of Indian Affairs to share information.

The FLIR technology is homegrown. The company is headquartered about 15 miles south of Portland in Wilsonville, Ore.

The firm also sells its thermal imaging tech to law enforcement including locally to Clackamas County.

We recently used our plane’s @flir camera to capture a fleeing suspect hiding in the woods. Here’s the video. Stay for the punchline. pic.twitter.com/QBlb2Myyor

The pandemic has brought new business to FLIR. Amid the economic downturn, the company in August reported high demand for its thermal imaging cameras used to detect elevated body temperature. FLIR booked about $100 million in orders of its body temperature scanners during the first quarter, and approximately $70 million during the second quarter.

Similar to its aerial cameras, FLIR’s body temperature scanning technology visualizes thermal data gathered through infrared cameras. Instead of detecting the heat signature of something on the ground below, it measures precise body temperature levels.

The firm’s body temperature scanning tech has been installed in transit hubs, hospitals, stadiums, and factories throughout Asia, Europe, and the Middle East. Before COVID-19 sparked more interest from U.S. clients, many of its cameras had been employed in response to the SARS epidemic and the Ebola outbreak.

Founded in 1978, FLIR went public in 1993. It reported full-year revenue of $1.9 billion in 2019. The company’s stock nosedived in March, bounced back in April and May, but has fallen slightly through the summer.