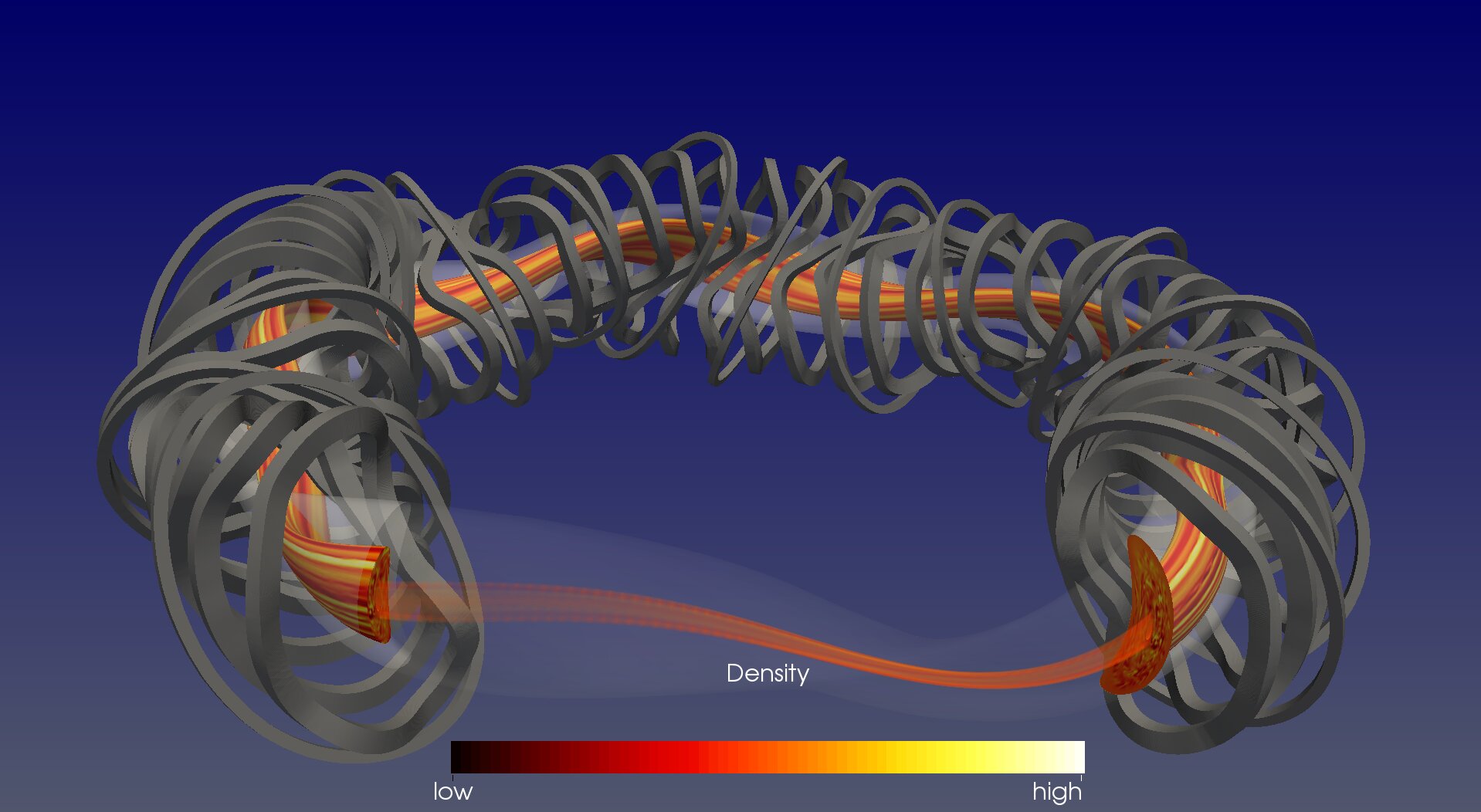 The turbulence model called Gyrokinetic Electromagnetic Numerical Experiment (GENE), developed at Max Planck Institute for Plasma Physics (IPP) at Garching, Germany, has proven to be very useful for the theoretical description of turbulence in the plasma of tokamak-type fusion devices. Extended for the more complex geometry of stellarator-type devices, computer simulations with GENE now indicate a new method to reduce plasma turbulence in stellarator plasmas. This could significantly increase the efficiency of a future fusion power plant.

For the fusion researchers at IPP, who want to develop a power plant based on the model of the sun, the turbulence formation in its fuel—a hydrogen plasma—is a central research topic. The small eddies carry particles and heat out of the hot plasma center and thus reduce the thermal insulation of the magnetically confined plasma. Because the size and thus the price of electricity of a future fusion power plant depends on it, one of the most important goals is to understand, predict and influence this “turbulent transport.”

Since the exact computational description of plasma turbulence would require the solution of highly complex systems of equations and the execution of countless computational steps, the code development process is aimed at achieving reasonable simplifications. The GENE code developed at IPP is based on a set of simplified, so-called gyrokinetic equations. They disregard all phenomena in the plasma that do not play a major role in turbulent transport. Although the computational effort can be reduced by many orders of magnitude in this way, the world’s fastest and most powerful supercomputers have always been needed to further develop the code. In the meantime, GENE is able to describe the formation and propagation of small low-frequency plasma eddies in the plasma interior well and to reproduce and explain the experimental results—but originally only for the simply constructed, because axisymmetric fusion systems of the tokamak type.

For example, calculations with GENE showed that fast ions can greatly reduce turbulent transport in tokamak plasmas. Experiments at the ASDEX Upgrade tokamak at Garching confirmed this result. The required fast ions were provided by plasma heating using radio waves of the ion cyclotron frequency.

A tokamak code for stellarators

In stellarators, this turbulence suppression by fast ions had not been observed experimentally so far. However, the latest calculations with GENE now suggest that this effect should also exist in stellarator plasmas: In the Wendelstein 7-X stellarator at IPP at Greifswald, it could theoretically reduce turbulence by more than half. As IPP scientists Alessandro Di Siena, Alejandro Bañón Navarro and Frank Jenko show in the journal Physical Review Letters, the optimal ion temperature depends strongly on the shape of the magnetic field.

Professor Frank Jenko, head of the Tokamak Theory department at IPP in Garching, says, “If this calculated result is confirmed in future experiments with Wendelstein 7-X in Greifswald, this could open up a path to interesting high-performance plasmas.”

In order to use GENE for turbulence calculation in the more complicated shaped plasmas of stellarators, major code adjustments were necessary. Without the axial symmetry of the tokamaks, one has to cope with a much more complex geometry for stellarators.

For Professor Per Helander, head of the Stellarator Theory department at IPP in Greifswald, the stellarator simulations performed with GENE are “very exciting physics.” He hopes that the results can be verified in the Wendelstein 7-X stellarator at Greifswald. “Whether the plasma values in Wendelstein 7-X are suitable for such experiments can be investigated when, in the coming experimental period, the radio wave heating system will be put into operation in addition to the current microwave and particle heating,” says Professor Robert Wolf, whose department is responsible for plasma heating.

According to Frank Jenko, it was another “enormous step” to make GENE not only approximately, but completely fit for the complex, three-dimensional shape of stellarators. After almost five years of development work, the code GENE-3-D, now presented in the Journal of Computational Physics by Maurice Maurer and co-authors, provides a “fast and yet realistic turbulence calculation also for stellarators,” says Frank Jenko. In contrast to other stellarator turbulence codes, GENE-3-D describes the full dynamics of the system, i.e. the turbulent motion of the ions and also of the electrons over the entire inner volume of the plasma, including the resulting fluctuations of the magnetic field.