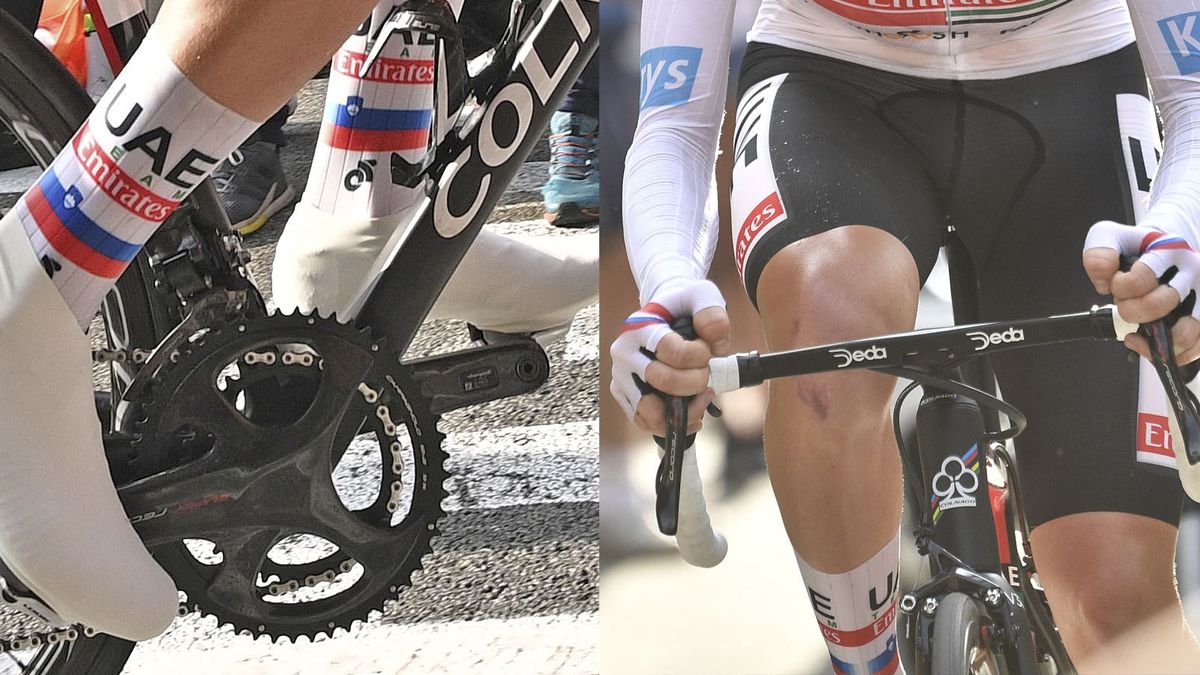 Tadej Pogačar stormed to victory and the yellow jersey on the stage 20 time trial up La Planche des Belles Filles. For the phenomenal ride, which will bag him the Tour de France overall victory, the young Slovenian opted against using a cycling computer, disabling the use of power or heart rate data to measure his effort on the 5.9km climb. He still rode the fastest ever ascent of the climb despite a bike change 200 metres into the ascent, beating Fabio Aru’s 2017 time by two seconds.

Coming into stage 20, Pogačar was 57 seconds down on his rival, friend, and countryman Primož Roglič. His task was simple but complex at the same time; go as hard as possible to take that time back, but not too hard too soon, as the slopes of La Planche would punish, just as they did Roglič.

As the Slovenian national time trial champion, Pogačar started the stage aboard a custom-designed Colnago K-One time trial bike with its Colnago logos resplendent in the colours of the Slovenian flag. No heart rate monitor was worn, but between his custom-shaped Speedbar aero extensions sat a Stages Dash computer, displaying the numbers from the Stages power meter which was fitted to his Campagnolo Bora Ultra aero crankset.

Pogačar’s phase one was a measured effort, but it still got him to the bottom of the climb faster than anyone bar two-time world time trial champion Tom Dumoulin, and 36 seconds up on his target Roglič.

Like many of his rivals, Pogačar opted for the bike swap at the foot of the climb. He spent just seven seconds motionless and a further five regaining speed, but it was from here on in that Pogačar was flying blind aboard the Colnago V3RS.

With its integrated cable routing, his Deda Alananera handlebar is noticeably void of clutter already, but today it was particularly empty. There was no Stages Dash cycling computer to be found, nor could the Stages hardware be found on the Campagnolo Super Record crankset, and of course, still no heart rate monitor.

Thanks to the introduction of the power meter, professional bike racing can be likened to a rolling maths problem. Chris Froome’s numerous Tour successes have involved ignoring accelerations in favour of riding a steady-state effort, gauged by the numbers on his head unit. Elsewhere, sprinter’s teams reeling in breakaways will do so using calculations to ensure the catch happens, but not a moment too soon.

It’s in a time trial where this data can be most beneficial, though. Riders will know their capabilities and will use the power meter to ensure they stay within them. Foregoing this data opens a rider up to getting carried away with the emotion of the occasion and the adrenaline from the screaming fans, potentially resulting in going too hard too early. Going into the red too soon, especially during a time trial that finishes up a category one climb, can end in disaster.

However, conversely, a power meter can also hold a rider back, and a day where Pogačar needed to close a 57-second deficit wasn’t a day to be held back.

For many riders, a place on the Tour de France podium is too big to risk losing. But to 21-year-old Pogačar, just a “kid from Slovenia” who has already realised his dream of simply being at the Tour de France, and who has an entire career of Tour de France attempts ahead of him, disaster was small risk to take when the yellow jersey is the reward.