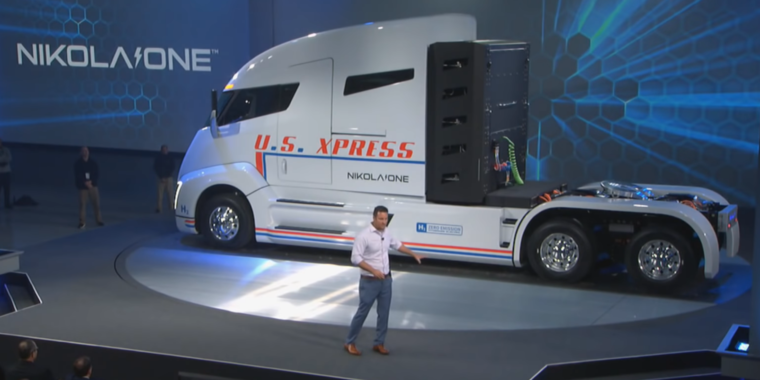 Two years ago, hydrogen-truck startup Nikola sued Tesla claiming that the Tesla Semi was a knockoff of Nikola’s own truck design. On Wednesday, Tesla filed a response in the case accusing Nikola of basing its own truck on a 2010 concept by designer Adriano Mudri. Mudri is now director of design at the Croatian automaker Rimac.

According to Tesla, Nikola founder Trevor Milton met with Mudri “during 2014 and/or 2015.” Tesla says that Milton knew about the Road Runner concept truck at the time he applied for the design patents Nikola later used to sue Tesla and that Mudri’s design “constituted a significant inventive contribution” to the designs Nikola patented.

Tesla also points out that several elements of Nikola’s design—including the wraparound windshield and general streamlined shape—have long been featured in other semi trucks. Tesla included photos of several other trucks that share features with Nikola’s patented design.

In a statement to Ars, Nikola said that it would “review Tesla’s counterclaims and respond appropriately.” The company added that “Nikola alleges that Tesla’s semi-truck infringes not only certain Nikola design patents and utility patents, but also its trade dress.”

Nikola has had a difficult month. Two weeks ago, the short-selling firm Hindenburg Research revealed that Nikola never got its first truck, the Nikola One, working. Nikola created a promotional video for the truck by rolling it up a shallow hill and letting it roll back down. Milton resigned from the company on Sunday, and the controversy has reportedly made it difficult for Nikola to find partners to help it build a planned network of hydrogen-fueling stations.