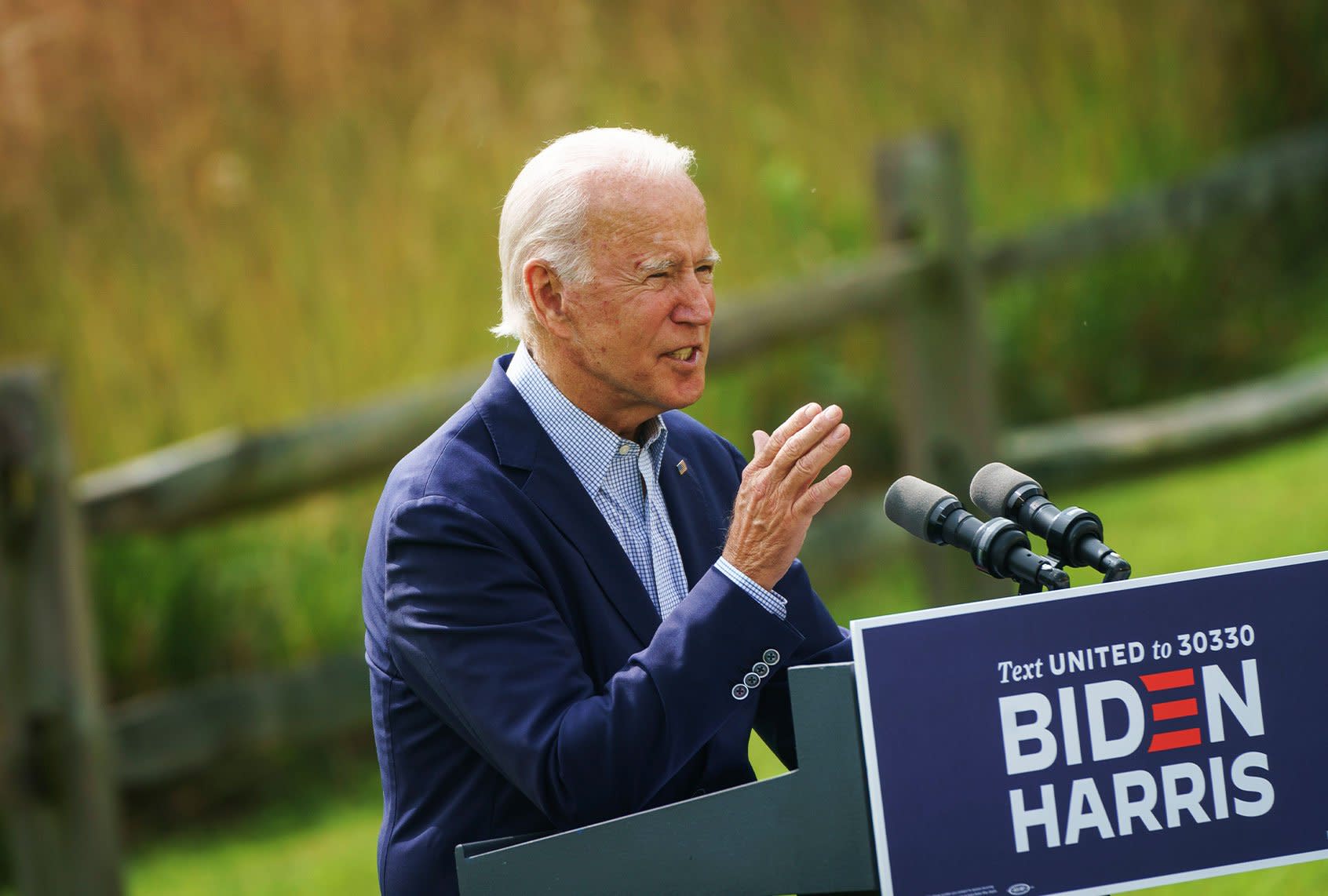 Democratic presidential nominee Joe Biden speaks about climate change and the wildfires on the West Coast at the Delaware Museum of Natural History on September 14, 2020 in Wilmington, Delaware. Biden has scheduled campaign stops in Florida, Pennsylvania and Minnesota later this week. Drew Angerer/Getty Images

From Ronald Reagan in 1984 to Bob Dole in 1996 and even Hillary Clinton in 2016, candidate health has become a common theme across recent U.S. presidential campaigns.

The issue is poised to take on added significance this fall. No matter who wins, the U.S. is set to inaugurate its oldest president by a wide margin.

The Trump campaign and its surrogates have seized on Democratic nominee Joe Biden’s age and have been painting him as mentally unfit for the presidency. Videos of Biden falling asleep during an interview, misspeaking about the dangers of “Joe Biden’s America” and appearing lost during a campaign event have bolstered the belief, particularly among Trump supporters, that Biden is in cognitive decline.

There’s just one problem: None of these videos are what they seem, and some of the events depicted didn’t happened at all. Technological developments have made it easier for people to produce seemingly real videos that are anything but. These deceptively altered videos have become a major element of disinformation campaigns that wield falsehoods in an effort to sway voters.

Altering videos can be as minimal as removing a few frames to as extensive as dramatically altering whole videos using Hollywood-style special effects. The latter has been enabled by advances in artificial intelligence and “deep learning” technology. Deep learning makes it possible to create hyper-realistic though entirely fictional videos called “deepfakes.”

Deepfakes are created by programs that accumulate a library of existing photos, videos and audio clips to learn a person’s manners of speech, expression and behavior. Using this data, these programs can then render a composite image of the person that can be made to say and do anything the programmer wants, such as President Richard Nixon announcing the loss of the Apollo 11 astronauts.

Deepfake videos are far from perfect, but the potential is frightening.

While deepfake technology poses a threat to people’s ability to distinguish real from fake videos, the most sophisticated of this technology is not yet widely available. However, advances in video editing software have introduced a perhaps more immediate threat — the “cheapfake.” Unlike deepfakes, cheapfakes involve manipulating an existing video using slick though widely accessible editing techniques. The result is a video that bears little resemblance to the original footage. And even poor-quality manipulated videos can fool people.

Using these techniques, people can remove critical context from real events, make an individual appear confused or disoriented, or splice together two separate clips to create a moment that never happened. This latter technique was used to make it appear that Biden fell asleep during an interview.

Disinformation and the 2020 election

With high-profile manipulated videos recently circulating online, it seems reasonable to ask: Could these videos — such as those suggesting Biden is in cognitive decline — influence who wins the election?

These sophisticated video-altering techniques are relatively new, so there’s little direct evidence about the effects manipulated video content can have on political outcomes. However, it’s possible to draw lessons from the surge of research into the effects of disinformation and misinformation in the aftermath of the 2016 election.

Researchers were keenly interested in whether disinformation contributed to Donald Trump’s victory over Hillary Clinton — a plausible scenario given that the race was decided by fewer than 80,000 votes. Some studies suggested that the influence of disinformation was probably small, while others argued that the closeness of the 2016 race meant that disinformation could have made the difference.

Four years later, the election again has the potential to be a nail-biter. And while there have been efforts at boosting media literacy and mitigating the spread of disinformation since then, the novelty of deepfakes and cheapfakes could catch viewers off guard. If so, the video “proof” of Biden’s failing cognitive health could lead voters to have second thoughts about his candidacy. And while our work suggests fact-checks can be effective in pushing back against disinformation, they might not be able to completely reverse this damage.

But disinformation is unlikely to reach everyone equally. Research from 2016 found that people were most likely to engage with disinformation when it supported their preferred candidate, an observation especially true for Trump supporters. If this extends to 2020, these videos might serve mostly to reinforce Trump voters’ beliefs about Biden’s cognitive demise rather than create new doubts within the wider electorate.

Disinformation can also affect campaigns beyond swaying voters. It can influence the agendas of news outlets. If manipulated videos succeed in bringing questions about Biden’s cognitive capabilities into the spotlight, they could detract from the Biden campaign’s core message by pressing the campaign to reassure voters about his mental health. The campaign has had to respond to these questions even before the recent circulation of the manipulated videos.

Deepfakes and cheapfakes have the potential to affect how people see and understand the world. The threats, whether to election integrity or international security, are real and have caught the attention of Congress and the Pentagon.

There are several technological efforts aimed at spotting and ultimately blocking altered videos. There has been some progress, but it’s a difficult problem. The technology is evolving into an arms race between the fakers and the detectors. For example, after researchers developed a way to identify deepfakes by looking at eye-blinking patterns, the technology adapted.

There are also efforts by the news media to come to grips with altered video in the fact-checking process. The Washington Post has developed a fact-checkers’ guide called Seeing Isn’t Believing, and Duke University’s Reporters’ Lab is developing MediaReview, a system for fact-checkers to tag manipulated videos to alert search engines and social media platforms.

If the fakers pull ahead of the detectors in this altered video arms race, the 2020 election could come to be seen as the start of an era when people can no longer be certain that what they see is what they can believe.

This article is republished from The Conversation under a Creative Commons license.