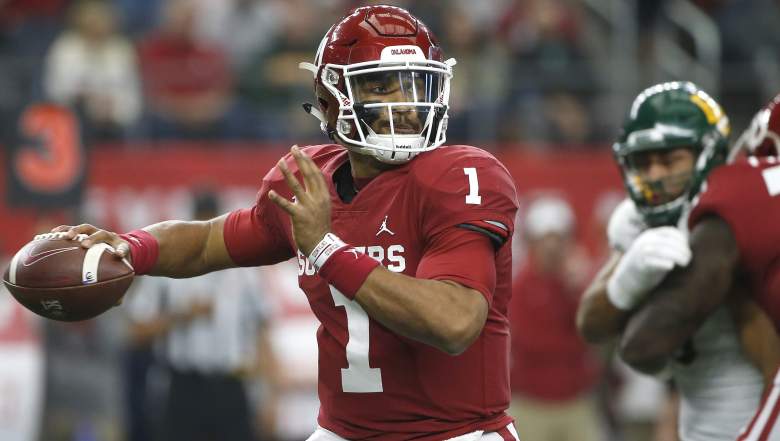 The Jalen Hurts experience is about to begin in Philadelphia. Buckle up.

The Eagles made their second-round pick active for Sunday’s showdown against Los Angeles after sitting him in Week 1. The former Oklahoma and Alabama quarterback will be the backup behind Carson Wentz, with Nate Sudfeld staying inactive in Week 2. The latter was the No. 2 quarterback last week.

No one is sure what Doug Pederson’s gameplan is for Hurts — the Eagles head coach has been coy with reporters about his role — but if Wentz goes down, he’ll be forced into action. It’s also believed that the Eagles will employ a certain number of gadget-style plays for Hurts. Anything is possible. Everything is on the table.

“I think that’s a week-to-week discussion that we have as far as the backup quarterbacks,” Pederson said earlier this week about making Hurts active. “You’d love to have all three quarterbacks up. We had Nate [Sudfeld] up this past weekend, and we make those determinations on really, injuries, and where we are as a team moving forward. But I would say that if he were up, he doesn’t necessarily have to be a part of the game plan in any specific way.”

The Eagles listed six players inactive for Sunday, including WR Alshon Jeffery, QB Nate Sudfeld, RB Jason Huntley, DE Genard Avery, G Jamon Brown, G Sua Opeta. Obviously keeping Hurts active over Sudfeld was the biggest surprise. Jeffery is out until at least Week 3 and Brown was still getting “up to speed” after joining the team on Tuesday. The lack of depth at the guard spot is a little concerning. Nate Herbig gets the start on the right side for a second straight week.

Herbig admitted he was “surprised” when Pederson told him he was starting in Week 1. He had been running with the first-team offense in practice but he didn’t find out he was going to be lining up at right guard until a few days before last week’s game. Herbig had to quickly soothe the butterflies in his stomach.

“It was later in the week when I found out that I was going to get a chance to play and start my first NFL start,” Herbig told reporters on a Zoom call. “I just tried to take things in stride and do my best.”

Fun fact, according to @PFF, Nate Herbig had a 77.4 pass-blocking grade, the highest mark of any player on the Philadelphia #Eagles in Week 1. pic.twitter.com/lx7ArNUmUy

Herbig had played three total snaps prior to the Washington game. Now he has 68 offensive snaps under his belt after grading out at a 60.4, per Pro Football Focus, and helping to keep Carson Wentz upright. His 77.4 grade in pass protection was the best mark on the entire Eagles’ offensive line in Week 1.

“Since I was a little kid, I always dreamed of playing in the NFL,” Herbig said. “Getting this opportunity is a blessing to me, and all I can do is just go on and do my job and do it the best that I can and try to help the team win.”