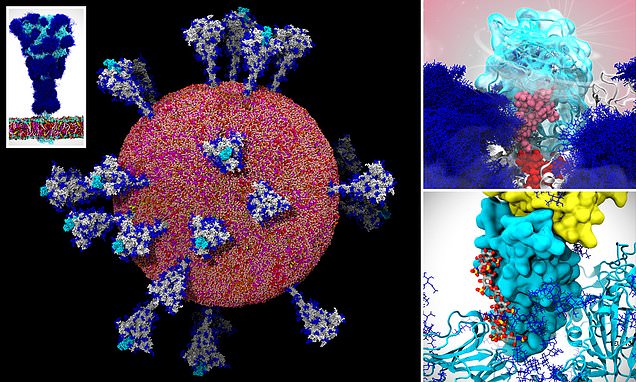 Computer images show the spiked cell that has killed millions


By Harriet Alexander For Dailymail.com

A team of scientists in China have created the first images of the COVID-19 virus in an important milestone on the road to finding a vaccine and cure.

Dr Sai Li, a structural biologist at Tsinghua University in Beijing, worked with virologists who were creating the virus in a biosafety lab in the city of Hangzhou.

They treated the virus with a chemical to make it harmless, then sent a sample of virus-filled fluid to Li.

He and his team reduced the virus to a single drop, which Li flash-froze, and then looked at through a cryo-electron microscope.

‘I saw a screen full of viruses,’ Li told the New York Times, looking at something that measured less than a millionth of an inch.

‘I thought, I was the first guy in the world to see the virus in such good resolution.’

Li’s work has enabled scientists to learn how the virus some of its proteins to slip into cells.

They learnt how its twisted genes take over the body’s biochemistry.

Researchers have observed how some viral proteins serve to wreak havoc on our cellular factories, while others build nurseries for making new viruses.

And some researchers are using supercomputers to create complete, virtual viruses that they hope to use to understand how the real viruses have spread with such devastating ease.

‘This time is unlike anything any of us has experienced, just in terms of the bombardment of data,’ said Rommie Amaro, a computational biologist at the University of California at San Diego.

Amaro and her team have been studying the proteins, called spikes, that stud the virus’s surface.

The spikes are used by a virus to hook onto cells in our airways so that the virus can enter.

Her team, using Li’s imagery, realized that the spikes were not rigid, but were constantly flexing.

Gerhard Hummer, a computational biophysicist at the Max Planck Institute of Biophysics, and his colleagues used Li’s method to take pictures of spike proteins embedded in the virus membrane, and then create models which showed the spikes were swiveling on three hinges.

‘You can see these flowers waving with all kinds of bending angles,’ Hummer said. ‘It’s quite surprising to have such a long, slender stalk with so much flexibility.’

Hummer believes that the spikes are flexible so they can swivel and have the maximum chance of latching on to cells in the airways.

Their flexibility does mean, however, that they are more vulnerable to attack from antibodies.

Sugar molecules act as a shield for the spikes, swirling around them and protecting them from the antibodies, scientists now know.

Amaro is now using the images to try and work out how the virus is spread.

She is constructing virtual viruses on supercomputers, each consisting of a half-billion atoms, the paper reported.

The computers can simulate the movement of the viruses every femtosecond: in other words, a millionth of a billionth of a second.

When infected people exhale, talk or cough, they release tiny drops of water laden with viruses. It’s not clear how long COVID-19 can survive in these drops.

Amaro is planning to build these drops, down to their individual water molecules, on her computer.

She will then add viruses and watch what happens to them.

Scientists are excited by the new imagery, which they believe will enable them to assess how the virus controls our biological processes, and then work to block it.