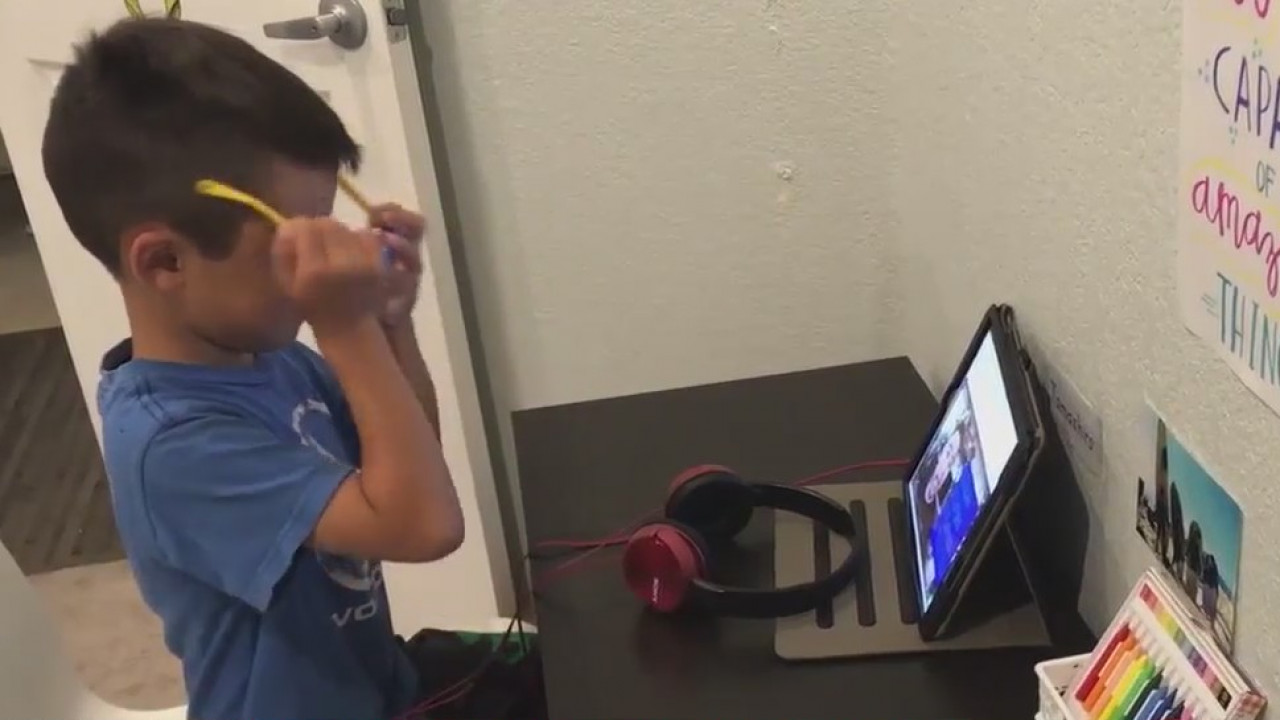 ‘Children are burned out’: RPS parents worry too much screen time affecting their kids

RICHMOND, Va. (WRIC) — Kids have become mentally and physically exhausted with the city’s virtual school schedule, according to some parents.

8News has learned that dozens of parents relayed to the Richmond School Board that they worry their children are spending too much time in front of a screen.

Elliot Haskell, the father of a kindergarten student at Obama Elementary School, said: “My daughter has been regularly ending the day with headaches.” Haskell and others read their comments during Monday’s virtual board meeting.

Sarah Hall, who has children who attend G H Reid Elementary School, said: “After lunch, my children are burned out, tired and have lost focus.”

The Board proposed altering the school schedule. The vote, however, did not take place Monday. The Board plans to survey parents soon. In the meantime, parents like Hannah Abbey say children as young as five are sitting in front of a computer screen five to six hours a day and it’s taking a toll.

“I’ve noticed an increase in aggression towards me in the form of anger three or four times a day. I’ve noticed her sleep is more disrupted as well,” Abbey said.

But what about the physical effects?

“We’re seeing a lot of neck pain and headaches from poor posture during extended screen times, said Dr. Tiffany Kimbrough, a pediatrician at Children’s Hospital of Richmond at VCU. Dr. Kimbrough told 8News she, too, is already seeing children’s health issues related to too much screen time.

Too much screen time takes away from creative playtime, she says, and it can have an impact on development.

Prior to the pandemic, the American Academy of Pediatrics recommended daily screen time be limited to two hours or less for school kids. Doctors say it can lead to irritability, anxiety, depression, obesity and a decline in fine motor skills.

“You may not be doing those fine motor activities like playing with Legos or building and coloring and working on your grip strength,” Dr. Kimbrough said.

The science is still out on the long-term effects on the eyes. Yet, Doctor Evan Silverstein, a pediatric ophthalmologist at the Children’s Hospital of Richmond at VCU, recommends the 20/20/20 rule.

“Every 20 minutes, looking 20 feet, away for at least 20 seconds,” Silverstein explained.

Parents may have seen ads for trendy blue light blocking glasses but Dr. Silversteisn suggests that families may want to hold off from purchasing a pair.

“There is no good science behind blue light blocking glasses,” Dr. Silverstein added.

Instead, he told 8News set up matters – good lighting and a workspace away from a window could help.

“If you position it where there is a lot of glare coming in from outside, that can affect the eye strain,” he said.

The ophthalmologist adds that distance from the screen can reduce eye strain.

Students should also avoid hunching over, Dr. Kimbrough added. “We want ideally for the screen to be at the same level as the child’s eyes.”

For a child who wiggles a lot while online, doctors say a fidget seat or yoga ball can be helpful as long as it is OK with the teacher. Dr. Kimbrough also suggests a timer for kids having trouble returning to virtual school after lunch. It helps kids to know there is an endpoint to the break and that can reduce those parent/child power struggles, she said.

Concerned about virtual learning? Tips on how to support kids at home

Increased screen time maybe unavoidable these days so when the classes end, Doctor Kimbrough says get the kids to put down the devices and get active.

The experts say if your child is having frequent headaches, trouble sleeping, or a lazy eye, it’s time to contact your doctor.

8News learned that increased screen time could uncover a hidden need for glasses as well. Dr. Silverstein adds that even before the pandemic, doctors were seeing an increase in kids who are nearsighted. He says research has shown it’s been linked to a decrease in outdoor time for kids.