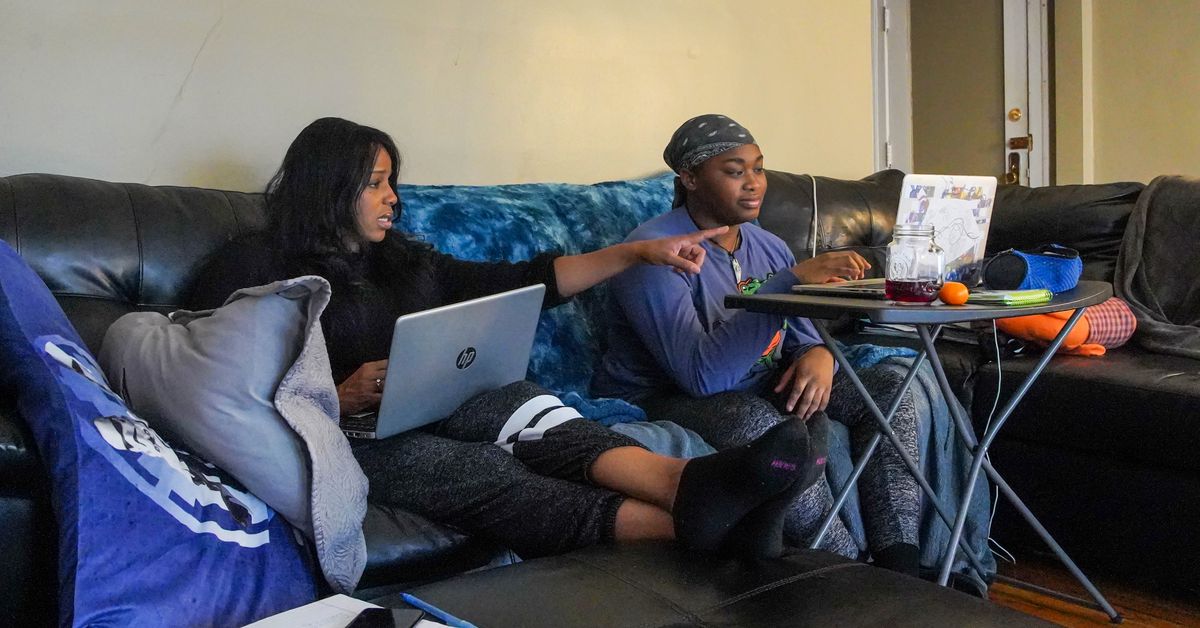 A remote learning debate rages: How much computer time is too much?

Months after remote learning discussions centered on access to computers, talks have shifted this fall to another heated debate: How much time should kids be spending on those devices every day?

As it goes with most decisions made at Chicago Public Schools, opinions have varied widely on the issue, with many parents and teachers arguing the current system that has children in front of a computer for hours at a time is too burdensome for students and families. Still, others say they’ve managed just fine so far, especially when kids are given breaks throughout the day.

Lori Torres, a Spanish teacher at Monroe Elementary, said she’s watching her students on a daily basis struggle to stay focused and or even awake in the afternoon because of long, draining schedules that aren’t tailored to their needs.

“I see my kids, and I know we can do better by them,” Torres said. “I think if the district is wanting us to be successful at this — I know I want to be successful at this, and my kids do, too — I think it requires us to really take a look at what the expectations are for these children and try to refocus so that these schedules are more humane, and so that families can support kids as best as possible.”

CPS’ remote learning guidance calls for 360-minute school days for elementary students, with 180 minutes of daily synchronous learning featuring live instruction for kindergarten through second grade, 205 synchronous minutes for third to fifth grades and 230 minutes per day of synchronous learning for sixth through eight graders. In high school, courses are to be 80% synchronous, the district said.

Gabrielle Wilson, a mother of a kindergartner and a second-grader, urged district leaders at the Board of Education’s monthly meeting Wednesday to allow for more flexibility.

“The current remote model is impossible for working parents,” Wilson said. “I am proposing a less demanding synchronous working schedule. … The current remote scheduling that models a traditional bell schedule needs to be changed immediately.”

Wilson pointed to guidelines from the Illinois State Board of Education released over the summer that say districts should be mindful of caretakers’ schedules and allow for flexibility for families — guidance Wilson said CPS isn’t following.

Wilson started an online petition a week ago calling on CPS to reduce required screen time for the youngest elementary students. The petition had garnered more than 2,800 signatures by Wednesday afternoon.

CPS spokesman James Gherardi said in a statement that the school system listened to parents who said in the spring they wanted more consistent learning schedules with live instruction every day. But he acknowledged not all families have the same difficulties.

“Strengthened standards and structures were needed to ensure students have access to the daily live instruction they deserve, and we are deeply sympathetic to the challenges and competing priorities families are balancing during this unprecedented time,” Gherardi said.

Sarai Coba-Rodriguez, an assistant professor of educational psychology at the University of Illinois at Chicago, said scheduling flexibility is key to making remote learning work for the most students. She said CPS needs to be patient because not every child is going to be able to do exactly what they want.

As for the youngest elementary students, who are the focus of her research, Coba-Rodriguez said virtual class time should mostly consist of students talking and socializing with each other and their teachers.

“I think it needs to be engaging, where students are in a way multi-tasking, where they have a worksheet, they’re following along with the teacher, or they have to do something that you don’t have them sitting there just listening,” she said.

“I just can’t see developmentally how it’s appropriate for you to ask a young child to stare at a computer quietly and not fidget when they can barely do that in the classroom,” Coba-Rodriguez said. “That’s not how children learn. They need to touch things, they need to explore their curiosity. In front of the screen, they’re not doing that.”

Parent: Teachers have been understanding

Some families have had an easier time with the transition to remote learning this fall.

Tara Lockwood, the mother of a fourth grader at National Teachers Academy in the South Loop, said the screen time is more than she’d prefer but “not terrible” given the circumstances of learning at home.

Lockwood said her son’s classes have him on screen for about three and a half hours each day, but they switch between synchronous and asynchronous time, with breaks that let him get up, stretch and walk around to stay fresh. Teachers have been understanding and allow students to turn off their cameras for a few minutes, she said.

“For us, that’s given my son some autonomy to kind of move about as he needs to within the day to keep engaged,” Lockwood said. “He’s actually handling it pretty well. A lot better than I thought he would, and much better than in the spring.”

School board member Lucino Sotelo said at Wednesday’s meeting after Wilson and a few other parents spoke about screen time that officials know the remote learning plan isn’t perfect, and parents should make their voices heard at their individual schools.

CPS CEO Janice Jackson added that while she believes the year is off to a good start, she and other officials recognize “the need to innovate and to be dynamic.”

“We’re not spiking the ball at the 20-yard line,” Jackson said. “We still have work to do.”